The mission of Fulton County Juvenile Court is: first, to protect children and the community in matters brought before the court, to rehabilitate children, and to restore families; and second, to create opportunities for the community, partners, and stakeholders to actively engage in this mission. 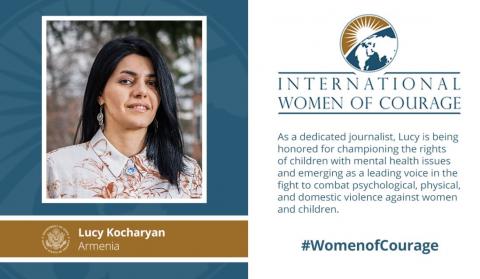 Using her platform as a journalist, Kocharyan has championed children with mental health issues and has emerged as a leading voice in the fight against psychological, physical, and domestic violence against women and children. Through her dedication and resolve, Kocharyan became famous for launching "Voices of Violence" in August 2018. She has become a spokesperson on gender-based violence in Armenia and has continued to speak out despite harsh criticism - from people on the street who yell "shame" as she passes by, to parliamentarians speaking out against her and threatening her with lawsuits.

She successfully started a conversation about domestic and sexual violence that is slowly leading to some action. Gender-based violence is a pervasive problem throughout Armenia, where traditional social norms regarding masculinity, femininity, gender equality, and the division of household tasks remain rigid, making her achievements and impact all the more impressive.

Fulton County Juvenile Court is the statewide leader in utilizing evidence based rehabilitative services to aid youth and families in overcoming their present circumstances and growing to become healthy and self-sufficient. The mission of the Fulton County Juvenile Court is: first, to protect children and the community in matters brought before the court, to rehabilitate children, and to restore families; and second, to create opportunities for the community, partners, and stakeholders to actively engage in this mission.
Presiding Judge Renata D. Turner leads the School Justice Pathway Partnership, an initiative involving Fulton County Schools and Atlanta Public Schools that successfully reduced school-based juvenile court referrals by over 50 percent.

The International Women of Courage (IWOC) is the prestigious Secretary of State’s Award which annually recognizes women around the world who have shown exceptional courage and leadership in advocating for women’s rights and empowerment. Through this annual award, the United States honors the work of extraordinary women worldwide who have played transformative roles in their societies.

Notice Regarding Electronic Filing: Private Attorneys, Court Appointed Attorneys and Pro-Se Litigants may file pleadings and other legal documents electronically via the Clerk's Office email address: fcjc.clerk@fultoncountyga.gov. ** Please contact 404-613-4663 or (404) 612-4419 for additional information on submitting documents or pleadings electronically, prior to visiting the courthouse in person **

Fulton County Juvenile Court is committed to compliance with Title VI of the Civil Rights Act of 1964 as amended and all related regulations and directives. To learn more about Title VI compliance, please click here.